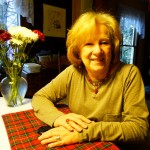 Hey there!  This is my final post on WALKING BY INNER VISION for 2014. I am more than HAPPY with the final report on this blog –  I received it today from Word Press.

A San Francisco cable car holds 60 people. This blog, , WALKING BY INNER VISION,  was viewed about 3,000 times in 2014. If it were a cable car, it would take about 50 trips to carry that many people.

The busiest day of the year was August 10th with 274 views.

The most popular post that day was Lazy Summer Days of August.

Here is what I have to say about all that:

THANK YOU from the depths of my spirit.

In January 2014, Bob and I entered into new territory that has changed our lives forever. Bob became very sick and it was not until April 17, 2014 that he  was FINALLY diagnosed with Acute Myeloid Leukemia (AML).  On the day he received word of this diagnosis, he had to report immediately to West Penn Hospital in Pittsburgh, PA.  Chemo treatment was begun immediately after his admission. He was hospitalized for a month initially.

Over the rest of the year, he would undergo four more hospitalizations and more chemo treatments. On October 2, after another week of intensive chemo treatments (his fourth) he was given a STEM CELL TRANSPLANT.  This is nothing short of miraculous because most patients will wait a long time and will never get the donor and will pass away before it can happen.  AML is aggressive,  fast moving and deadly.  The other thing is that Bob was 73 years old when this all started.  Most patients over age 60 will not be offered treatment, we were told by doctors on several occasions. Bob is  blessed beyond imagination to have been considered for this aggressive treatment plan and transplant.

He is recovering and improving day by day. And, here we are at the end of 2014, still standing together and still looking ahead to the new calendar year that will begin at midnight. As part of the plan to keep people informed about AML and to let people know how to pray for Bob, I started a Facebook Community page – I post updates and photos of Bob and information on AML and transplant donor information. Please stop by and let Bob know you saw his page and wish him well.  Click on:  https://www.facebook.com/boblambertdiary  Bob Lambert – December 29, 2014

I promise to keep on writing essays for you here at Walking by Inner Vision.

My focus will be on writing and making art, through my own EYES, as always. And, you probably know by now I am a visually impaired artist , author and educator.  Until we meet again at this place, I send you PRAYERS for a lovely and joyful 2015.  May you have the strength to meet any challenge, and wisdom to know what to do, day by day.  Lynda McKinney Lambert