↓
Home→Writing→The Story Behind the Art 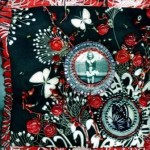 Girl on a Bench Sees Visions of Butterflies 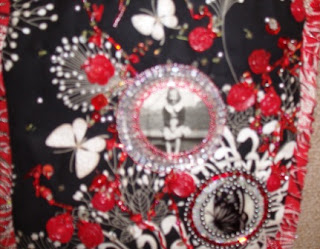 It’s a warm day near the end of August.  A little dark-haired girl sits alone on a wooden bench looking straight ahead.  She peers silently out over her world, and into the future, where we stand watching her today.

Her starched and pressed cotton dress is plaid, with a wide white collar that lays over her shoulders.  She patiently waits there in her  back yard for her cousins to arrive.  They are coming to celebrate her birthday. It is 1950.

We walk towards her and as we get near, she watches us carefully as she continues to smile.  Just above her head, we notice that she is sitting under the old deeply textured branches of the Black Walnut tree. It is the centerpiece of the back yard.

Besides the tree, the little girl sits surrounded by fields of late summer flowers in full bloom. Queen Ann Lace and gentle  butterflies are mingling and floating casually among the lacey blossoms. The scene is still, frozen in a moment of time by a Brownie Box Camera. The photographer this day is her Mother.

This vintage photo of the little girl is   in very pale black and white.  It had been laminated long ago to the back of a small round pocket mirror. Her Mother had carried the mirror in her handbag. In her old age, the Mother had given the mirror to the little girl who was now a grandmother. The mirror had cracked in half at some time in the past, but the beautiful photograph was in perfect condition. This photograph became the central image of the art work that would become _Girl on a Bench Sees Visions of Butterflies_ here on the wall of the gallery.

It’s quite a small work of art. It is a personal and private scene.  The work measures approximately 12 inches, square. 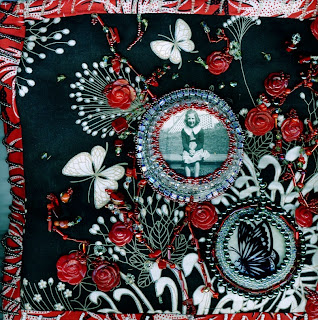 The images on this art work have been hand worked, over top of a cotton fabric from the 1940s. The vintage fabric  is in Black and White, but much sharper and bolder than the photo of the little girl. Sharp, crisp white flowers and butterflies dance about on the surface of the ebony  black fabric background.

There is a surprise burst of brilliant color on the black and white scene though.  Over the entire surface, brilliant hot red leaves and flowers are overlaid.  And, bursting forth from those slender and delicate stems, are brilliant red roses that are carved out of red coral gem stones. Bouquets of these red coral roses are waiting to be gathered, it seems. Yet, they will forever bloom there, regardless of the passing seasons in this world that is suspended forever outside of time itself.

The joyful old-fashioned  roses circle around, intertwining with the  photo of the girl on the bench. And, the circle of the mirror  has been surrounded by layers of delicate and glistening  Japanese seed beads. They have been patiently worked, layer upon layer, by the artist who was once the little girl in the photo.  The glass beads are so small and they capture the light from all directions. This makes the little girl in the photo seem to shimmer in her round space in the center of the picture, and gives it an unreal appearance. It is  seems like we  have entered into a dream world or a vision.

Throughout the picture on the gallery wall, is a myriad of other flower shapes made from Mother-of-Pearl, and natural gemstones. In this small space we can see visions of earth and sky as we enter into the moment of time when the little girl sat patiently waiting for her birthday party to begin.

from a piece of 1940s printed fabric.  I chose  a  vintage reproduction  print fabric for this work because that is when I would have been a young girl. I was born in 1943. This  nostalgic fabric became the structure on which I  began creating a story of a childhood memory – a moment in time that brings the viewer into the world I lived in as a child. It’s a snapshot of a long ago summer day – flowers, butterflies.

After meticulously working the entire surface of this fabric with gemstones and beads, I began to work a beaded serpentine spiral around the border of the square.  The spiral travels around all four sides of the art work. It has been surrounded by layers of red, white, and black beads that go in and out on the front and back of the surface.  The edge work holds the front of the work to the back fabric. The back fabric is also a 1940s print, in brilliant lipstick  red. On the red surface there are   bursts of white flowers that look like shooting stars coming from the black center of each flower.

Once this piece was finished I had to think about how it would be presented on a gallery  wall. How would it hang?  I took a walk in the woods and found just the perfect size of twig and the idea came to me that the piece would hang from a twig, suspended in space. To finish the piece, I made some loops from the same Japanese seed beads that I had used in the picture – and these loops hold the fabric piece to the branch that hangs above it.

This fiber work has been selected to appear in the Hoyt Mid Atlantic Exhibition.  It will open to the public on October 9th and be on display there until November  2, 2012. 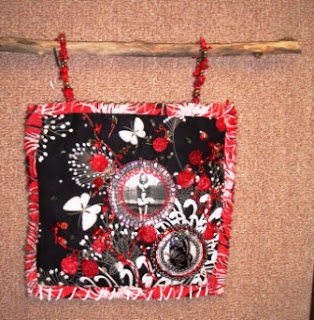