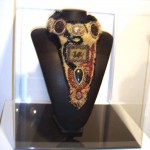 It  is by going down into the abyss that we recover the treasures of life. Where you stumble, there lies your treasure ~ Joseph Campbell

For where your treasure is, there your heart will be also. ~ Luke 12:34 is on display currently in The New Collective exhibition at Pittsburgh Center for the Arts, Pittsburgh, PA  through January 19th, 2013.

It has the appearance of a necklace that could be worn. It is a clever deception.

This encrusted bead work “show-stopper” is what I label “Unwearable Art,” and it holds a special place in my own personal life journey. In my academic lectures and research articles, I have always had a keen interest in studies of ancient and medieval mythology and imagery.  The many parallels I have discovered between contemporary culture and the historic stories have led me to devote many years of my life to these revelations.

While on a trip to New York City in August 2007, I purchased the beads and central dragon image that I would use in a new project.  What I did not know on that sunny August afternoon  was that I would not be physically able to bring it to completion as I had planned that day.

This work marks the end of the first part of my sighted life and the beginning of the second part. my life without sight.  Just after I started work on it, I suddenly lost most of my eyesight. With only one fourth of the piece completed, it came to a screeching stop. I could no longer see the piece at all and had no way of ever knowing I would be able to once again do this kind of intricate bead working.  I plunged into despair at times, yet always kept this dragon piece at the back of my mind. I longed to be able to create work like this again.

After five years of blind rehabilitation, I returned to this work to pick up where I had left off.  I can tell you, it was not an easy task. I had many failures, messes, and mistakes before I finally reached the place in my mind where I had the confidence to be able to work again on this piece.  Just as the Dragon image in ancient Eastern Culture is one of healing and protection, this particular Dragon became a healing symbol, or, a trophy, to me.  The Dragon signaled that I had won the battle and beat the doubts.  I rejoiced in the victory of my own return to wholeness. The Dragon image became symbolic of my own creative journey and healing. It gave me understanding that I share healing through my artworks.

“What do I see when I look at this artwork?” I have asked myself.

I realize it’s an inner landscape; it shows the terrain of my own inner struggles and victory over a disability.  Inside this complex labyrinth, I can visualize how my own creative path required new eyes.  Some days, I move forward with a lump of wet clay in my hands; other days, I hold tight to a slender needle with thread in my hand.  Willfully, I walk into the mists of the unclear, uncharted present.

Here is where my eyes see glory! May we keep on creating MAGIC and sharing  with the world.