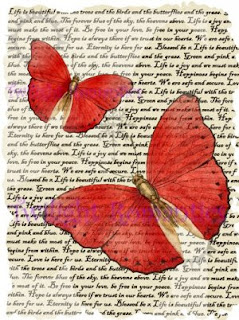 We are fully into the Spring season now.
Spring time here in Pennsylvania  brings with it a myriad of flowers. They  begin to scatter over the meadows and fields and along the roadsides.
***
January 2008 is a time I will always remember the special appearance I saw of two butterflies.  Yes, it was in the deep freeze of winter time when  I watched  two butterflies playing in the stillness of an afternoon.
Unusual and miraculous because it  was not spring time.
There were no flowers.
the butterflies were  not cavorting  over a field or meadow.
Every time, since that day, as I see a butterfly it brings back a memory for me.
I had just lost most of my sight by this time.  I had not yet had any help and did not  know about technologies that would help me, nor did I yet know of rehabilitation for the blind. I had no white cane, and no way of doing just about anything I had done just a couple months before. Overnight, my entire life was transformed into something that was new and unexpected. I could not use the elevator because I could not see the buttons to press, or know what floor it had landed on. Simple things like that, we took for granted, but those simple things were now a mystery to me.
It was at this very time that my second daughter, Heidi Melinda, was diagnosed with ovarian cancer. Now, I stood at her bedside in the IC unit in a Pittsburgh, PA hospital. Her surgery to remove the tumor that had spread to a stage 3C cancer was completed a few days before. But nothing had gone well, and within a couple of days she was near death. They had put her in an induced coma to try to give her sick lungs the opportunity to begin to heal.
Day after day, it was one step down after another.
Even though I could not see very much, I was staying at the hospital day and night. I could find my way from the waiting room, to the bathroom, and to my daughter’s room. I slept for short periods during the night, sitting in a chair in the waiting room of the IC unit. Then, I would walk back to her room, to sit by her bedside.
She was kept in a coma for over 2 weeks. Nurses and doctors were at her side or directly outside her room working on the monitors and computers continuously, monitoring her, searching for the right mix of drugs to help her. We waited there in limbo as the days went by. There was nothing we could do but pray and wait. Family members came and went, all helpless.
One afternoon I sat in the chair at the bottom of her bed with my eyes focused on her laying there with tubes and apparatus all over her body. The hospital staff had named Heidi, The Sleeping Princess. On this afternoon, the Sleeping Princess had two unexpected visitors. They did not come in through the door.
As I watched Heidi, two enormous butterflies were there. They emerged from the base of her feet and they flew back and forth, playing with each other as butterflies do when you see them in a field. The two butterflies were a deep red crimson and they were the size of my hand. They were bright and very large. As I watched them, it was the most normal scene I could ever have seen. Heidi’s body was the field over which they were zig-zagging back and forth over as they moved towards her head. It seemd like I watched them for quite awhile, but I believe it was probably only seconds. It was like an eternal moment, when time did not exist, and I had been a witness to timelessness.
The butterflies made themselves visable to me. They gave me new hope for my daughter. I knew they were the Holy Spirit, made visable.  I recognized that the Holy Spirit had come to visit the Sleeping Princess that afternoon and that this would be the afternoon when Heidi would begin to recover. I was assured at that moment when I saw this vision that my daughter would heal and that she had experienced a miracle. 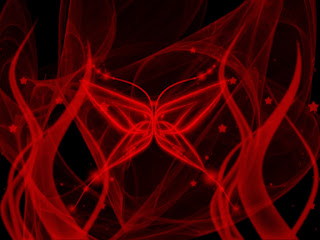 Today, Heidi remains free of ovarian cancer, even though the tests done in surgery had shown that the cancer cells were throughout her entire body. She undergoes tests and scans all the time in Pittsburgh. She has an entourage of doctors who are keeping a close watch on her. She has side effects from her surgery and her long recovery time. Her body remembers the trauma, and her body is still responding to it. Our bodies carry memories, and those memories in the entire body continue to have a response to the trauma it went through. 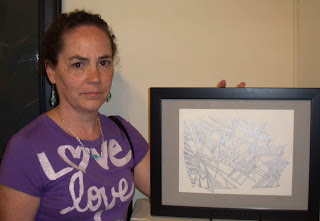 Heidi with one of her art works, May 2012
Heidi is an artist who has a studio on a mountain top, in the woods of Pennsylvania. She actively works at her art, and is in exhibitions including an international invitation one that her work is in right now.
Shortly after Heidi  recovered,  she organized The Sleeping Princess Team with her friends. The team raises money for the Ovarian Cancer Coalition of Pittsburgh. This is the fifth year that the team and Heidi’s family will walk with her at the Walk to Break the Silence in the fall.  Our little team has been able to raise over $20,000. in funds to contribute to the cause. 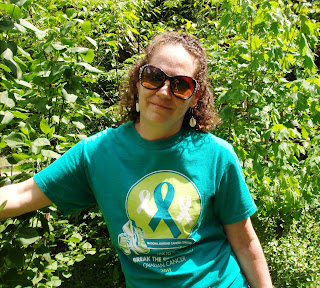 Heidi wearing her SURVIVOR T-Shirt – Sept. 2011
Yes, butterflies are harbingers of renewal and transformation, and healing.
They are a reflection of the Creator.
Butterflies come to bring us joy and healing.
Like God, they are right on time! Every time!