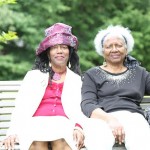 Be my Guest – Catherine Lamkin

I have asked only one question:

What is on your mind?

Each guest brings something from their heart or mind to YOU!

Each of my guests is a talented professional in their own field. I want to know what they are thinking about & want to share with others through this blog.

When my mother came to Charleston (SC)  for my father’s memorial service she presented me with the apron that I made in sewing class in 1966. I can remember how proud I was when I brought it home and showed it to my mother, the professional seamstress. It is a pink apron with an embroidered  on the pocket. It was  a gorgeous apron! Years later when I looked at that apron in 2003, it seemed crude, with uneven stitches. This gift from childhood brought back so many memories of sewing and literally growing up on the hem of my mother’s skirt, poncho, evening gown…you name it!

If my mother had been born with anything in her mouth, I would have to say it was a silver needle.

My mother, Winifred Sanders,  was born in 1932 in Harlem Hospital to Gullah Geechie parents who migrated from South Carolina for the promise of a better life without Jim Crow. My grandparents did not find the hope and the promise they looked for. Instead, through a series of events, my mother was  raised by her paternal grandmother Delia Deas Smalls and Aunt Anna.

I cannot remember a moment in my life when my mother was not making something.  The hum of her Singer sewing machine was my lullaby, gently rocking me to sleep, stitch by stitch as she sewed deep into the night. Stitching and mending, hemming, and sewing, but most importantly always creating. I believed sewing was her first true love, long before she met my father.  At times I was embarrassed by all this creativity. As embarrassed as a teenager can get after spending one’s entire life shopping in Macy’s Department store for fabric. Macy’s elevator, back then, made an announcement as it stopped on each floor. “Fourth floor women and girls department”. I always wanted to get off on the fourth floor, but we never did. Always departing on five, greeted by bolts of velveteen piled sky high. My dreams of shopping for real clothes, were buried deep inside pattern books. As if the clothes my mother made were not real and beautiful. As if she did not pour more love than any factory worker could ever pour into the skirts she hemmed for me. I hope she has found it in her heart to forgive the teenager in me.

My mother attended Central Needle and Trade High School now known as Fashion Industries High  School. Today, graduates attend Fashion Institute of Technology; when my mother graduated in 1950, girls went straight to the Triangle Shirt Factory. My mother went to work in a panty factory, and hated every moment of it. She quit that job when she married my father, but never gave up her first love. In the 1970’s she began to work outside the home teaching sewing and crafts to seniors. This experience transformed my mother; she discovered the art within her soul. In 1989 she began to make cloth dolls. Watching my mother create in this way was fascinating for me, but not as fascinating as what was to come. She joined Women of Color Quilters Network and began using her sewing machine as a paintbrush creating wonderful art quilts. Was this my mother the professional seamstress, daughter and granddaughter of traditional quilters cutting loose, breaking from tradition and her “sewing roots”?  Non- traditional quilter in the house!

In 1998 after learning of her niece’s death, she was  filled with sadness.  My mother turned to her art and created a piece for me representing the three most important women in her life. This is a delightful piece full of hope and love. The three women in the quilt are her grandmother, aunt and daughter. Each is wearing a black and white dress made from fabric from my great grandmother’s and aunt’s clothing. We are rejoicing together, wearing outfits of wearable art!

We are all dancing. My mother often called me to share an idea or tell me about a project she was working on. Rarely did she ask me what I thought; clearly she knew where she was going and how she was going to get there. In 2000, at the age of 68, she had arrived; she was offered the opportunity to participate in a two-woman show. This was a major turning point in my mother’s life as a fiber artist because her work was validated with the sales of several of her pieces. I have also broken from tradition and consider myself a budding art quilter. But as my mother would say, we all started off as traditional quilters, keeping a little bit of tradition close to our hearts, but moving to new heights, moving on. Above:  Detail View  of “Mama” Quilt by Kebe,’  daughter of Catherine Lamkin.

On Sunday, November 19, 2006 my mother and I attended the closing reception for “Ain’t Gonna Let Nobody Turn Me Around.” The show was sponsored by “Quilters of Color of New York.” It was on display at the Fuller Craft Museum in Brockton, Mass. This was the first public exhibition of my work and I presented it there with my mother’s work. Above: Photo by Kebe’ – Quilt by Catherine Lamkin

“I  am an artquilter. And I have quite a story to tell. I was born on August 26th 1955. I was born exactly two months prior to my  mother’s due date. I weighed 3 pounds  and went down to 2 pounds.. This was before hospitals had all of those modern day neonatal prenatal medical wonders. I almost died twice from whooping cough and  pneumonia and did not start walking until I was two years old because when I was 1 year old  I was too small to walk.

Can you imagine? She had a lot of support from her grandmother who raised her and her Aunt Sissie.

Fast forward. I’ve had four brain surgeries for benign brain tumors. Three of the surgeries were surgeries that they had to drill through my skull etc. Shave my head etc. Unfortunately I lost the photos that I had my daughter take of me shortly after my 1st surgery with my shaved head and bandage.

Three days after I had that surgery I had an interview with a woman by the name of Lauren Cross who came from Boston to talk about “Colorism” and African American Quilters. She was the first person, besides my family who I showed my shaved head with. my 25 staples. She thought I was going to cancel the interview but I did not because it had been scheduled months in advance and she was not only interviewing me but 3 other quilters in Charleston.

My last bran surgery was in 2014: it was Gamma Knife Radiation Therapy to shrink the inoperable tumors that are pressing on my optic nerves in both of my eyes causing me to have a decrease in vision. I like saying a decrease versus vision loss but it’s actually vision loss. So as a result of that I had to retire in 2012  from the South Carolina Department of Health Education  (Charleston, SC)  because I can no longer drive.”

In HONOR of BLACK HISTORY MONTH, this special Guest Blog

Story and Photos are the property of Catherine Lamkin and

she holds the copyright to them.

See her work in this book:  African American Quilts Photo of Catherine Lamkin and her mother, Winifred Sanders  by Michael David Sanders. Photo: Catherine Lamkin is viewing a Peggy Hartwell Quilt. Lamkin is wearing a Fiber Art Work by her mother, Winifred, in this photo!

You my enjoy visiting  a website by another art quilter at:  More Art Quilting

This Guest Blog is courtesy of Lynda McKinney Lambert.

Story and Photos are supplied by the guest for each featured article. Lynda McKinney Lambert is the author of “Concerti: Psalms for the Pilgrimage” published by  Kota Press. To order it, click here:  Concerti: Psalms for the Pilgrimage
Lynda  authors two blogs on writing, the humanities, arts, and faith.
She is a freelance writer and her poetry and essays appear in numerous books and literary journals.  She is a retired professor of fine arts and humanities and she exhibits her fiber arts in exhibitions worldwide.
Currently, Lynda  has two books in development for publication in 2016.
Contact Lynda:  riverwoman@zoominternet.net
NOTE: If you would like a signed copy of my book, contact me for information.
Lynda McKinney Lambert. Copyright 2016. All rights reserved.