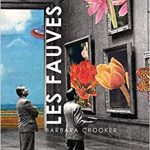 This article is a revised version of a book review I wrote two years ago for Wordgathering Literary Magazine. (Published December 2017) Read it Here!

My background in fine art and literature provided insight into the body of poems by Barbara Crooker. Her work was new to me. I was anxious to read her collection of poems as soon as I saw the cover of the book.

Les Fauves, by Barbara Crooker is available on Amazon. When you visit her Authors Page at Amazon, you will realize the scope and productivity of this poet.

“Painting is an Act of Belief”

Les Fauves, by Barbara Crooker, is a series of sixty-two poems divided into four sections.

The lyrics, inspired by a series of paintings from 1899- 1937, show a more comprehensive history than the official period for The Fauves movement, which was from 1888- 1906.

Crooker presents a literary exploration into the roots of modern art with selected key paintings by members of a small group of French artists known as Les Fauves. The meaning of this name means “The Wild Beasts.” Most notable artists are Henri Matisse, whose paintings appear in Section 1. Sections 2 and 3 are not based on specifically named artists. Finally, in Section 4, we read poems inspired by Vincent van Gogh, Pierre Bonnard, Seurat, Raoul Dufy, and Georges Braque. In the fourth section, she finds themes in several artists and artworks from the earliest years of the Impressionists, and she moves forward into the Post-Impressionists. The Fauve period is sandwiched in-between those two.

From the first poems in section 1, we enter into the world of postmodernism with the use of dual languages throughout the book. By using both English and French literature, she tells the stories and histories of two worlds, their contemporary society and the earlier world views of the artists and their paintings. Two languages, two distinctly different periods. Barbara Crooker defines a post-modernist world view while glancing through the lens of the Modernists – Les Fauves. The book is a collection of exquisite contemporary poems inspired by paintings and drawings. In a sense, Barbara Crooker is creating new poetry out of the techniques used in the pictures created over a century ago. Crooker takes readers on an intriguing journey from the very first poem in Les Fauves.

By choosing the period that she used for her artists and paintings, she sets the historical context preceding the new art movement, as well as focusing on works by artists that followed the Fauves. Crooker combined imagery from the past with her contemporary thoughts and musings to create pictures of constellated time.

The TWO main aspects of the Fauve artists are

Crooker chose the particular period as a critique of Modernism by using Post-modernist language and thought. Keep these goals in mind while reading the book.

Each painting described in the verses in this section dates between 1905 – 1937, near the end of the Fauve’s prominence.

All artworks discussed in thee poems in Section 1 are by Henri Matisse, the most prominent leader of Les Fauves. 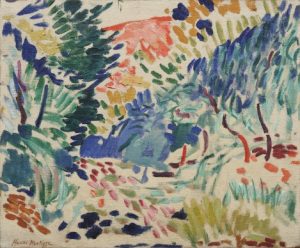 In the opening poem of section one, “Landscape at Collioure, 1905”  readers meet Henri Matisse. The poem describes the experience of being outside, with a focus on the Earth and the sky. This poem immediately gives us the primary philosophical requirement for a Fauve painting – the celebration of bold, even shocking, color. Notice the active verbs.

Color must be a physical act, created in new ways. The pigment shows the artist’s feelings and emotions about the people and the places he paints. Grass can be purple and blue – it is not necessarily green. A person’s face can be a variety of unexpected and stunning hues. Color selections reflect the desires of the artist. Color and texture make thick layers. Color is a building block, and it is like looking at buildings built from the bottom up. The paintings invite viewers to touch them to experience the energy of the artist at work.

Readers are given a window to peer through into the painted world of Matisse, where we find one of the most prominent themes of the Fauve movement – voyeurism and looking. We view this world through the eyes of the poet as she is seeing the Matisse landscape. Soon, we realize we are privy to the thoughts of the poet, and we entered into her contemporary world at the same time as she describes the scene. Listen for the description of the senses and the colors:

As you read, it is helpful to look at the paintings so you can understand how Crooker viewed them as she was writing the poems.  Above, you can see the Matisse painting, “Landscape at Collioure,”  from 1905.  The name and date of the painting became the title of her poem.

This hillside is the shade of grape soda,

lawn an ooze of electric jaundice,

and the sky is a violet slither. The red,

blue, and green trees are dancing, supple and sinuous, and the leaves are singing, a riot

of light. He squeezed out red-orange like plastic explosives. Painting is an act of belief.

Notice that Inside and Outside merge –

That was followed by noticing the lawn;

Finally, the sky; trees; leaves. The focus moves from the wide-angle view of the world, to the macro view of the smallest parts. Nothing is too short of describing.

In the final line, the poet speaks the words of Matisse to describe the act of painting, which is

“Figs” is the final poem of Section 1. I think it adequately describes the feelings Crooker has about the past artists and writers she encounters in this book. She uses the “poetic I” to speak as she describes an encounter with

“a young woman I had met the night

The woman offers her “a ripe fig” They split the fig and share it. It has beauty and tastes good.

The physical aspects of the fig, are described in Fauvist textures and colors:

with a greenish flesh, blood-red pulp,”

The “ripe fig” becomes a metaphor for the history of thought, language, and artistic progress. Those who are creators in arts and literature possess these qualities. Crooker opened this poem with a quote by the Prophet Mohammed because he believed the fig to be worthy of being in Paradise.

Language and grammar, combined with history, are Post-modernist techniques. Section I introduces the complexity of this period in art and literature.

“The seeds embroidered our teeth.”

This line gives a contrast between two art and literary movements – modernist and post-modernist.

” If I should wish a fruit brought to Paradise, it would certainly be the fig ”

I was staying in a village in southwest France,

trudging up the steep hill to the boulangerie

for my daily baguette. On the way back, I saw.

a young woman I had met the night

before. In her hands, a ripe fig, which

with a greenish flesh, blood-red pulp,

it opened with a thumbprint’s thrust.

The seeds embroidered our teeth.

I barely knew enough words to thank her,

as the stones under our feet. I crunched the grit,

my mouth filled with fruit and new syllables.

Even the fog, lifting from the river, that had

no language of its own, began to speak.

Crooker provides no dates or individual artists. She opens up the world of poetry with ideas sprinkled throughout the entire book.

I particularly want to give the nod to several poems from section 2 and 3:

“Drawing is the root of everything.”

The final part of the book.

Readers encounter a variety of artists and pictures. In the artworks of this section, additional members of The Fauves offer a contrast with the prior art.

Les Fauves feels like an art history discussion in the form of poetry. By layering ideas in language and imagery construction, Barbara Crooker created meaning.

The importance of drawing becomes the theme in the 2 poems I selected  – both inspired by Vincent Van Gogh.  Drawing is the core and provides the structure in all art works:

The last line is a quote of Van Gogh’s.

When I read these two poems, I could feel the motion of van Gogh’s hands and the weight of the tools in his hands as he

She speaks in the poem of the

“bones of the paintings – the things that came before

Paper and Ink, cheaper than canvas and paint.”

Could The Fauves have broken new ground in painting if they did not see the work of Vincent van Gogh? His oozing and vivid color applied in a frenzy of passion? It was he who “came before.”

Crooker also stands in a place provided by the artists who came before her.

In this collection of poems and in excellent works of art:

“Drawing is the root of everything.”

This essay is the work of Pennsylvania author and artist, Lynda McKinney Lambert.

You are invited to share this essay but I ask that you include my copyright information.