↓
Home→Writing→Turn YOUR Journal Entry into a Poem: Writing Assignment #21 – Part A 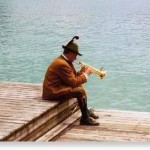 This article is an updated version of the one I published  on May 22, 2014 by Lynda Lambert
I revised and expanded it for you to use in your  Writing by Inner Vision Journal, June 5, 2015. Turn a Journal Entry into a Poem

PART A of Writing Assignment #21

There will be two parts to this assignment.

Writers often discover treasures for writing  poems and other literary pieces when they look back into history. They seek out additional insight and information on something they  think is interesting. You may want to try this method, too.

This way of working  inspired some of my best pieces. I keep  travel journals on my trips. I make sketches and  write short notes as I record my experiences. My travel journals become the raw material I looked back into long after I returned home.  I find exciting new revelations. Keeping a travel journal makes your trip memorable long after it is over.

My example: Writing in Mirabell Garden

The famous Mirabell Garden (Salzburg, Austria) was a place  I visited   during my summers of teaching in Austria. I inhaled  the  fragrance of  fully blooming roses in a formal garden.  I thought about how I would remember this place as I began to write about my experiences in my travel journal.

I wrote some quick notes about the palace – it’s location in the center of Salzburg and the fascinating Archbishop Wolf  Dietrich  who commissioned the building of the palace for  his mistress, Salome Alt. I imagined their children frolicking in the palace and in the gardens.  I used a  pen to make a few line drawings of various aspects of the architecture, the gardens, and the fortress on the mountain.

Later, I looked into some historical notes on this intriguing story.  The people who had lived in this magnificent palace became so real to me. I began to imagine their lives in a personal way.  This story did  not have a happy ending. The Archbishop eventually made so many political enemies that he was eventually arrested and imprisoned in the fortress dungeon where he spent the remaining years of his life. He died in prison in the fortress, high above the city, overlooking his palace.  His mistress, Salome Alt, fled with  their children to Wels, another  city where they were safe.

You can do a little scribble drawing, take some quick  photos,  or jot descriptive notes in a  journal. Later, when there is more time to think it over, use those thoughts and images when you  craft a poem. It only takes a few visual or text notations to awaken memories.

Turning Journal Notes into a Poem:

Consider the history of the place and the people who inhabited it.

Write down some historical notes on  location as you are visiting a place. That is the best way to begin. Later, when you are back home you can do some additional research to gain even more information to set the stage for the historical context.

Mirabell Palace, sits like a jewel in the heart of Salzburg, Austria. It was originally called Altenau,  built in 1606 by the Prince-Archbishop Wolf Dietrich von Raitenau as a home for his mistress Salome’  Alt and their children.   The famous Mirabell Gardens surround the palace.  Fischer von Erlach designed them .  On the grounds are stone sculptures  on the massive pillars at  each side of the gates as you enter the palace grounds.  They are depictions of mythological heroes.  In other places you can find sculptures such as unicorns, a Pegasus fountain, gloriously blooming flowers spilling from large urns and a magical rose garden all enclosed by local wrought ironwork.

The stone urns sit atop the stone pillars  that surround the lush gardens.  Each urn seems like it is literally spewing glorious flowers like a waterfall they are bursting forth from the urns. I sit and make pencil sketches of the urns. Each one is different from the others; each a different  design.

Wolf  spent the final six years of his life imprisoned in Hohensalzburg Fortress which overlooks picturesque Salzburg.  The fortress prison was his destiny as he was held prisoner until his death in 1612.”

Look over your notes and think about bringing something to life from this place and the people who lived there. What do you think they might have been like?

When I walked through the mansion, sat in the gardens, I thought of the love that a man had for a woman and the children they had together. Because Wolf  was a powerful Prince Archbishop, marriage was not permitted for them Yet, Salome’  was clearly his mistress. She bore thirteen children to Wolf who deisgned Mirabell Palace for Salome’  and the children.

I learned that Wolf spent the final 6 years of his life in prison.   I thought  of what might have been going through his mind in the prison dungeon as he remembered his beautiful mistress and their children. Did he know he would never see them again?

In my imagination,  Wolf  smuggled love notes to Salome’  during those six years of imprisonment. The focus I chose  to write about was  the imaginary love notes he sent to her. Back in my studio, I  hand-crafted an Artist’s book from hand made papers I bought at a specialty paper shoop in Salzburg. On each page of the book, I wrote one of the Haiku verses I created in this series. I  fashioned red and blue roses made from thin paper all through the book to illustrate the rose garden, the inspiration for my poems.

My poem  developed  as a  series of tiny “love notes” from Wolf  to Salome’ – Here is what developed, in the poem “Salome’s Garden.”

I chose to write each “note” using the  ancient  Japanese Haiku form because this type of poem  is  often used to express love. Below, you can read  the poem I developed from journal notes, my memories, imagination  and history.

(Haiku notes from Wolf to Salome. smuggled from prison)

If we could measure

The length of our time on earth

Before we began the journey

I would have hoped

When waxed begonias bloom in

Is our garden lush?

Do our marble stairs

Come to life during the night

When the putti dance?

Near the end of the garden

Hidden, out of view.

The scent of roses

We danced down pink marble stairs

To the secret garden path

Where the dwarfs carouse.

I miss your soft touch

Long to be near you at the

End of my journey

You are my crown jewel

In the snow that melts away

When our garden fades

I will remember you.

Our children will dance

In gardens we created